How I triumphed in dreams

My album Triomphe is released this month, on January the 19th, in the UK, one year after its French release. To celebrate this joyous rebirth, I’ve decided to blog an English translation of its introductory text*. I hope you will enjoy the story.

*The French original can be found here, and also in every CD and LP booklet. 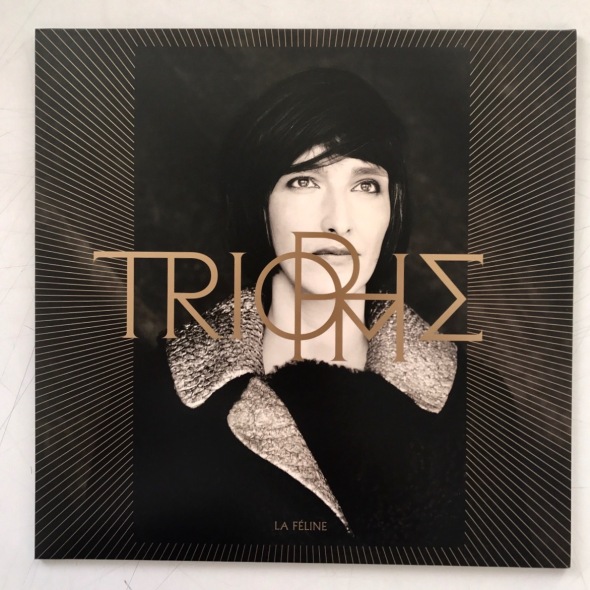 I remember a dream of triumph, I was 18 or 19 years old. It was summer. The room where I stayed was empty and white, in the South of France, not far from a steeple. I was sleeping on a mattress directly set on a floor of ochre and grey tommettes whose little differences I liked to observe. I remember the brightness of the whole. In the transition towards the dream, it probably played its part, as well as the big square bed, covered with white linen, which reminded me irresistibly of an old French song.

Obviously, I was dead.

But I was exulting. I had a body, and I was running. I remember the top of my thighs, my light and naked feet, my calves. A clear water bathed them halfway. It stretched out as far as I could see, seemingly split up on the horizon by a chalky cliff. Down under my feet, I could see the floor. No rocks, no sand, only long white paving stones, like one treads when entering in the temples of Mediterranean Antiquity. I was watching the slightly eroded stones drawing their base line and geometrical perspective. The transparency of the water had dispelled all of the monsters, those archaic hydras that I still imagine underneath, a few meters away from the surface, when I get lost swimming a bit too far from the beaches.
I was alone. I do not remember my shadow: the light invaded everything. I guess I am a social person; I like to live and think among other people. Yet, I was standing alone, in a state of happiness that left no doubt about the nature of this ecstatic moment. I did have a body, and the body was mine, but the force of gravity that tied it to the floor and to others had considerably diminished.
I moved forward without looking back, as if I was leading a joyful and sacred procession, conquering a territory, even if the conquest of this territory was for me of little importance.
I don’t know in what glory I bathed, but I was triumphing, the body elastic and light, carried by the beauty that surrounded me.
I sometimes wonder how long the dream lasted. Where was I running to, supposing I was running? What was there behind me, in front of the chalky cliff, at the opposite of my field of vision? And after having run so lightly on this sea far too clear to be wild, what would happen to me if I hung around there any longer?
My awakened consciousness perverts everything.
When it visualizes this dream, it finds this cliché of oceanic feeling laughable. It cannot live in that ecstatic moment, as it has already moved forward to the next one. It feels like the sun is cruelly burning my skin. It anticipates a gigantic wave from behind the cliff, putting an end to the childish lapping of my skipping. My awakened consciousness may have seen too many apocalyptic movies. But in a battle with other interior impulsions, that conscience did not invent this dream. This one was dead, so certain that I had not been the one I usually was. A fatal jubilation had kept it at bay, just in front of the door for the day when I was to find her back in its grey costume. Fortunately, a slice of this souvenir of ecstasy had crossed over the door in the reversed direction, stored in the psychic traces that the dream had dug out so instantly in my neurons. And I promised myself not to forget about it.
I ceased to think about it for quite a while.

But the waves of my memory alternatively took it away from me and carried it back, every time an occasion, a sensation or an image brought it new disturbances. Like for instance this Indian song — peyote, more accurately – « Witchi tai to », which enchants me, and in which the spirit of the water surrounds a swimmer’s head, the latter experiencing the joy of not being dead. Or like the fresco from the Tomb of the Diver that decorated one of my paperbacks. I learnt it was found at the end of the sixties in the archeological remains of the ancient sybarite city of Paestum. On its headstone, strangely cracked in its center, one can see the dead, naked, his arms tense, his sex visible, plunging from a small diving board into an ocean with a convex surface. On the left, a seven-branch tree shows signs of breaks and of withering. On the right, the same tree seems fully healthy. The last dive of the athlete is the one from which he will emerge livelier. I like this picture like no other. I would like to be buried in this kind of tomb. I would follow my dream in there, a dream in which, as I figured it out eventually, I wasn’t dead. Obviously, I was reborn. An intense feeling snatched me away from a previous life. But the triumph, this ecstasy, was not the fact of quitting the anterior life but rather of experiencing the passage, the renewal.
Some imagine them reborn through the fire, after passing through its purifying flames. I must descend from another race, an aquatic one. I have no passion for the merchants of happiness, who provide people with promises of a new life, sweeping away the past, as if the accumulated grime of a former life could be dissolved in a blink. However, I must admit that music always had on me this kind of power: with it, I experience suspended moments, the feeling of a renaissance, yet within a body and through time.

I do not believe in God, neither in a single one, nor in many. I am part of these European individuals attached to some fragments of culture, aware of the mortality of civilizations, and of the fact that the occidental universal is only but a province for other civilizations to come. I know that deep down in the water stand the hydras; I see them growing everyday. The triumph will probably not be mine, rather that of something coming to destroy me. Like that of the Roman emperors entering the cities they conquered, it will be loaded with deaths. But I have my dream, and my knife.